Set on top of the most visible hill of Istanbul, Topkapi Palace, is the symbol of Istanbul. 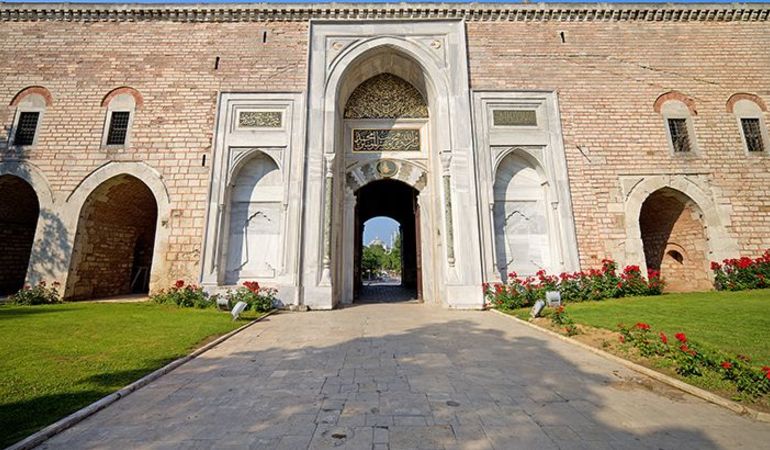 Set on top of the most visible hill of Istanbul, Topkapi Palace, is the symbol of the city. Opulent, decadent, and steeped in history, it offers visitors a chance to get to know the Sultans of the Ottoman Empire rather more intimately.

It was built in 1461 by Mehmet the Conqueror and remained both the symbolic and political home of the Ottoman Empire until Sultan Abdülmecid I moved the imperial retinue to Dolmabahçe Palace in 1853. During the four centuries in between, it hosted 22 different Sultans and their families.

The view of Istanbul Topkapi Palace from the Karaköy neighborhood

It was converted into a museum after the fall of the Ottoman Empire and the creation of the Turkish Republic in 1924 and is a must-see for any tourist visiting Istanbul. It is made up of four different courtyards and various exhibitions such as the treasury, weapons, watch collection, kaftans, portraits, and sacred relics of prophets.

The number of odalisques (concubines in the Imperial Harem) rose as the Ottoman Empire declined, numbering 809 during the reign of Abdülaziz (1861-76). They were often brought from Georgia or the Caucasus or captured in Hungary, Poland and Venice.

Some say that the fall of the Ottoman Empire was in part due to the madness that befell the unfortunate younger brothers of the Sultan who were imprisoned in The Cage (located within Harem section) to prevent wars of succession. When it was their turn to take the throne, several appeared to have become crazed by the many years of incarceration and were subsequently assassinated.

Topkapi museum is now the most visited museum in Istanbul, receiving nearly three million visitors annually. This means the queues can often be very large, particularly to see the Imperial Treasury and Room of the Relics of the Prophet. 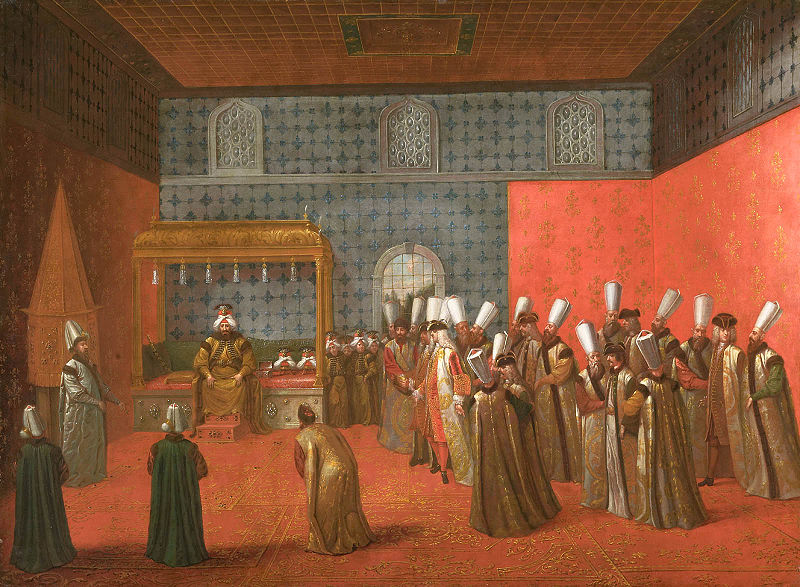 A painting from the regular Divan-i Humayun meetings of the Ottomans, Topkapi Palace (Imperial Council meeting)

What Not To Miss in Istanbul Topkapi Palace

Exhibited in the treasure section, this 86 carat diamond is listed as the fifth biggest diamond in the world. It is thought to get its name because it was found by a fisherman who, thinking it was glass, swapped it at a jewelry market for just three spoons.

You can encounter the finest quality of handmade Iznik tiles in all of Istanbul in the Harem section of the palace, which was once the private residence of Ottoman Sultans and their families. 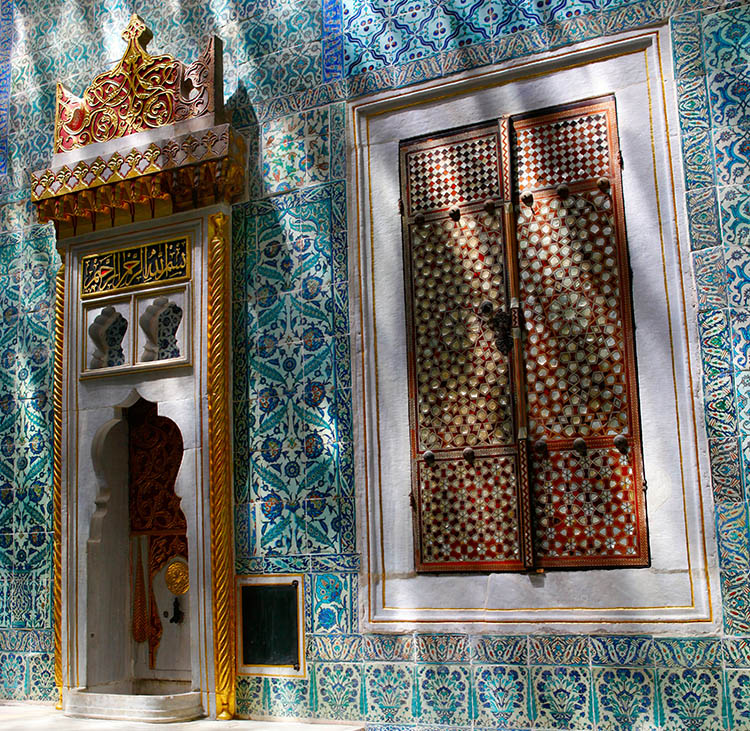 How much is the entrance fee of Topkapi Palace?

The entrance fee of Topkapi Palace is 200 Turkish Lira per person. To visit the Harem it is an additional 100 Turkish Lira per person. It's free for children under 12 years old, and entry to the Harem is free for those under 6. Museum entry is free for those in possession of a 72 hours Museum Pass. Please bear in mind that the Museum Pass does not include Harem section entrance. It needs to be purchased separately. 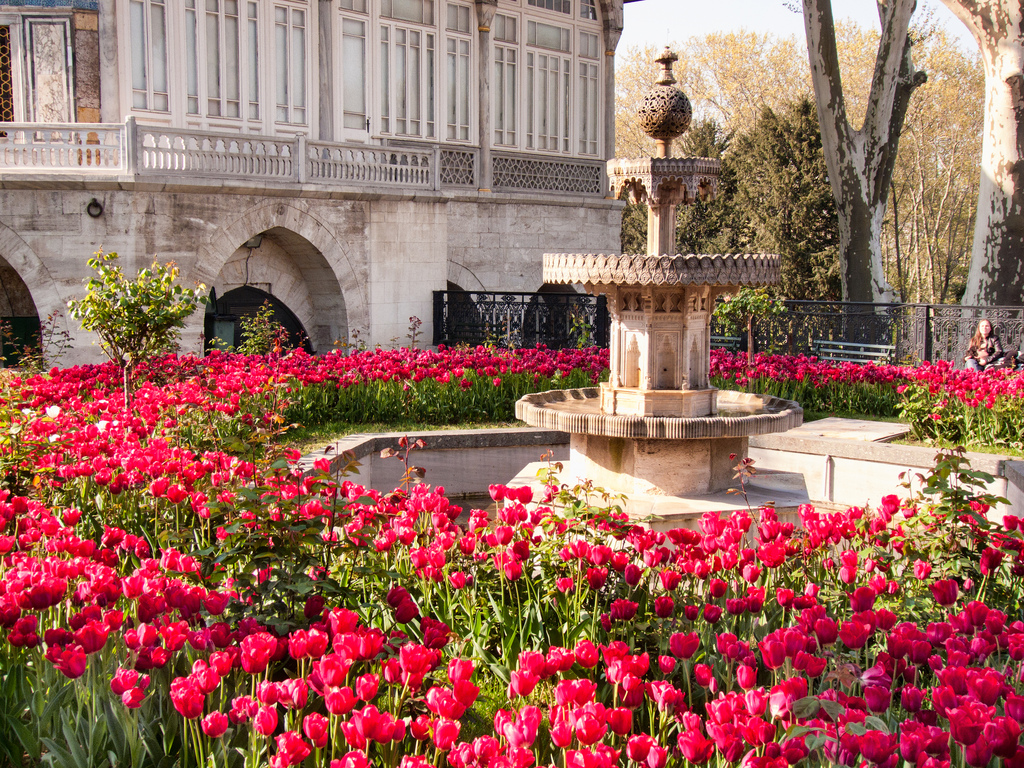 How much time do I need for the visit?

As there are four different courtyards and seventeen different exhibitions you can easily spend at least three hours in this gigantic place, so make sure to pick up a Topkapi Palace map at the entrance.

How can I get to Topkapi Palace?

Located in a prominent position in the old city, it is just a short, signposted walk from either Gülhane or Sultanahmet tram stations. There are numerous hotels near Topkapi Palace including Four Seasons at Sultanahmet and Armada Sultanahmet. 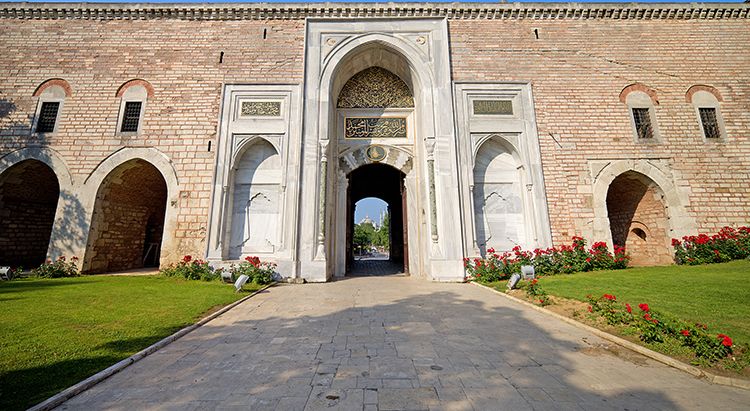 What are the opening hours of Topkapi Palace?

Topkapi Palace Museum is open between 9 am and 6 pm. It is open every day except Tuesdays.

Have you checked Dolmabahçe Palace?

You can easily spend at least three hours in this gigantic place, so make sure to pick up a Topkapi Palace map at the entrance.
DISTRICT
Sultanahmet
VISITING HOURS
09:00 - 18:00
Closed on Tuesdays
ENTRANCE FEE
200 TL
Official WEBSITE
Topkapi Palace
Topkapi Palace ON ISTANBUL MAP
Share this page
RECOMMENDED TOURS

Immerse into the glorious legacy of the Ottoman Empire, ruling over Eurasia for seven hundred years. See monumental landmarks and trace cultural heritage.
$ 125 BOOK NOW
Set on top of the most visible hill of Istanbul, Topkapi Palace, is the symbol of Istanbul. Opulent, decadent, and steeped in history, it offers visitors a chance to get to know the Sultans of the Ottoman Empire rather more intimately. https://istanbultourstudio.com/tours/topkapi-palace