The Sinan Paşa Mosque is perhaps the most seen mosque of Istanbul due to its location, however very few people visit this mosque built by famous architect Mimar Sinan. 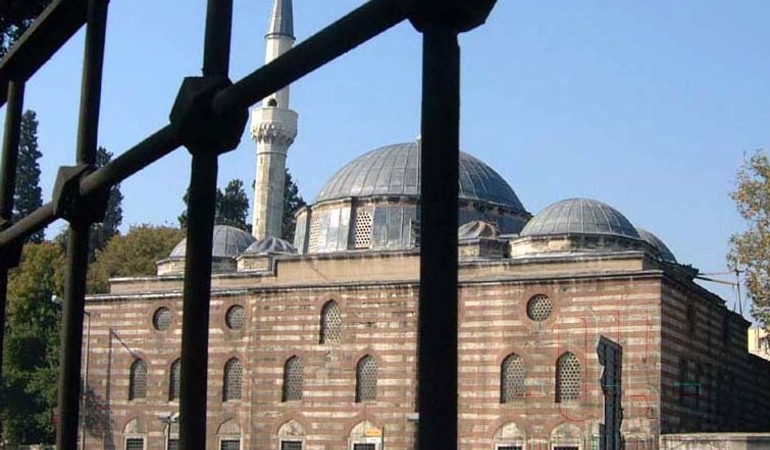 The mosque was commissioned by Sinan Paşa in 1550, who was the grand admiral (Kaptan-ı Derya) of the Ottoman navy between 1550 and 1553. Before the construction of the mosque, Sinan Paşa died in 1553 and could not see his work finished. Therefore he was not able to be buried in his own mosque - hence his grave is at Mihrimah Sultan Mosque. It was built as a mosque complex (külliye) including a mosque, madrasa (religious high school), mekteb (primary school), and hamam (Turkish bath); however, today only the mosque and madrasa sections are surviving. Other structures part of the mosque complex were destroyed in the 1950s due to road constructions.

The plan of the Sinan Paşa Mosque is rectangular in shape with a dome in the center and two small domes on both sides of the main dome. This architectural feature of the mosque is very similar with early Ottoman mosque architecture. Nevertheless, the dome of the mosque is supported by a hexagonal inner structure and this is the most important and unique characteristic of the mosque. Compared to other mosques built by Mimar Sinan, interior of the Sinan Paşa Mosque is less decorated because of untimely loss of Sinan Paşa during the construction phase. In the past few years, the mosque was under restoration. The mosque was re-opened to public  in 2014.

How to get to the Sinan Paşa Mosque

Situated in Beşiktaş, the easiest way to get to the Sinan Paşa Mosque is to take a boat from Kadıköy, Eminönü, or Üsküdar and get off at Beşiktaş. The mosque is across the Beşiktaş pier.

The Sinan Paşa Mosque is open from 9am-6pm every day, but closed at prayer times. There is no ticket price of the mosque, but donations are welcome.

Istanbul Naval Museum is just across the Sinan Paşa Mosque, make sure not to miss it!